On May 19, 1895, The Iowa State Register marked the arrival of the first Hellenic immigrants to the city by announcing that "Two Greeks...will open a big confectionery and fruit house." The first Greek entry in the Des Moines City Directory was "John Metrakos, Confectioner," in 1898. By 1920, the U.S. Census listed 230 foreign-born Greeks in the city.

As was typical throughout the United States, most early Des Moines Greeks came from southern Greece, especially from the villages of Feliatra, Pyrgos, and Antretsena of Peloponesus, but the young Greek community also hailed from Sparta, Athens, Corinth, Salonika, and the Aegean islands. Unlike Des Moines Italians, Greek settlement in Des Moines did not bear the stamp of a single old-world town or take the form of an ethnic neighborhood.

While many Greeks came to this state to work on the railroads, in Des Moines most of the early immigrants started their own shoe repair shops, restaurants, and candy stores.

The present Greek-American community in Iowa's capital city is a mixture of foreign and native-born from old Des Moines families, other American-born Greek-Americans who have moved to Des Moines, and more recent immigrants from many regions of Greece. 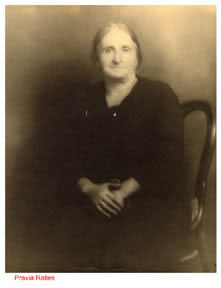 Portrait of Praxia Ralles, an early immigrant to the Des Moines area